React.js is a renowned JS library from Facebook developers used to create user interfaces for one-page and mobile apps. The library provides software engineers with a templated programming language along with a set of callback features for drawing up HTML and JavaScript components that remain in the same state on the user side. Currently, thanks to numerous advantages that React-based solutions bring, many companies tend to boost their target audience UX and, hence, increase corporate income.

But let’s dive into more details about React, about companies using React, and about the main reasons why devs tend to opt for this prominent tool instead of many others.

What is React in Essence?

React is an open-source JavaScript library - to be precise, a library based on the JavaScript XML extension - intended for interface development. It has neither controllers nor models nor templates (like in Angular.js) - React provides access to the View components. The solutions built based on React can be reused, combined one with another, and inherited.

Which Renowned Companies Use React?

Almost 8 thousand companies from all around the world are using React.js for implementing authentic web resources and mobile apps. They include such business and media giants as:

All in all, the framework can be easily integrated with some of the best-recommended related software products out there, such as Meteor.js, Redux, Firebase, Sentry, WebStorm, and others.

Another point we need to clarify, though, is that most companies are using React because they know what potential it brings to the table, coming from the experience of many previously-implemented solutions.

Thus, a company or an expert freelancer who uses React looks at a great success potential due to:

Modern web apps and sites become more and more content-intensive. They need to handle regular user interactions while properly displaying loads of dynamically-updated data. Angular is famous for providing fast rates of interface rendering, which boosts the overall level of UX, increasing your regular income in the long run.

In particular, React handles rendering so well due to Virtual DOM. Document Object Model (DOM) displays a reaction of HTML and XML components to user actions. For instance, if a newsfeed is being implemented, the DOM takes responsibility for drawing up components in the browser.,

In turn, when it comes to the full-blown, “heavyweight” type of DOM (which is, formally, a tree of interconnected elements), all the elements need to go through the so-called “dirty checking.” This causes additional delays during the content loading.

On the other hand, a Virtual DOM, being a lightweight alternative to the standard DOM and stored on the user-side, allows drawing up new elements in time spans the human eye just couldn’t notice. As such, the code is closely related to the state of the UI instead of data flows. This helps to achieve a multi-component approach to composing code as opposed to having to handle seamless blocks with numerous dependencies.

All in all, Virtual DOM is what brings the boosted performance of interactive web and application pages, boosting the overall user satisfaction as a whole. 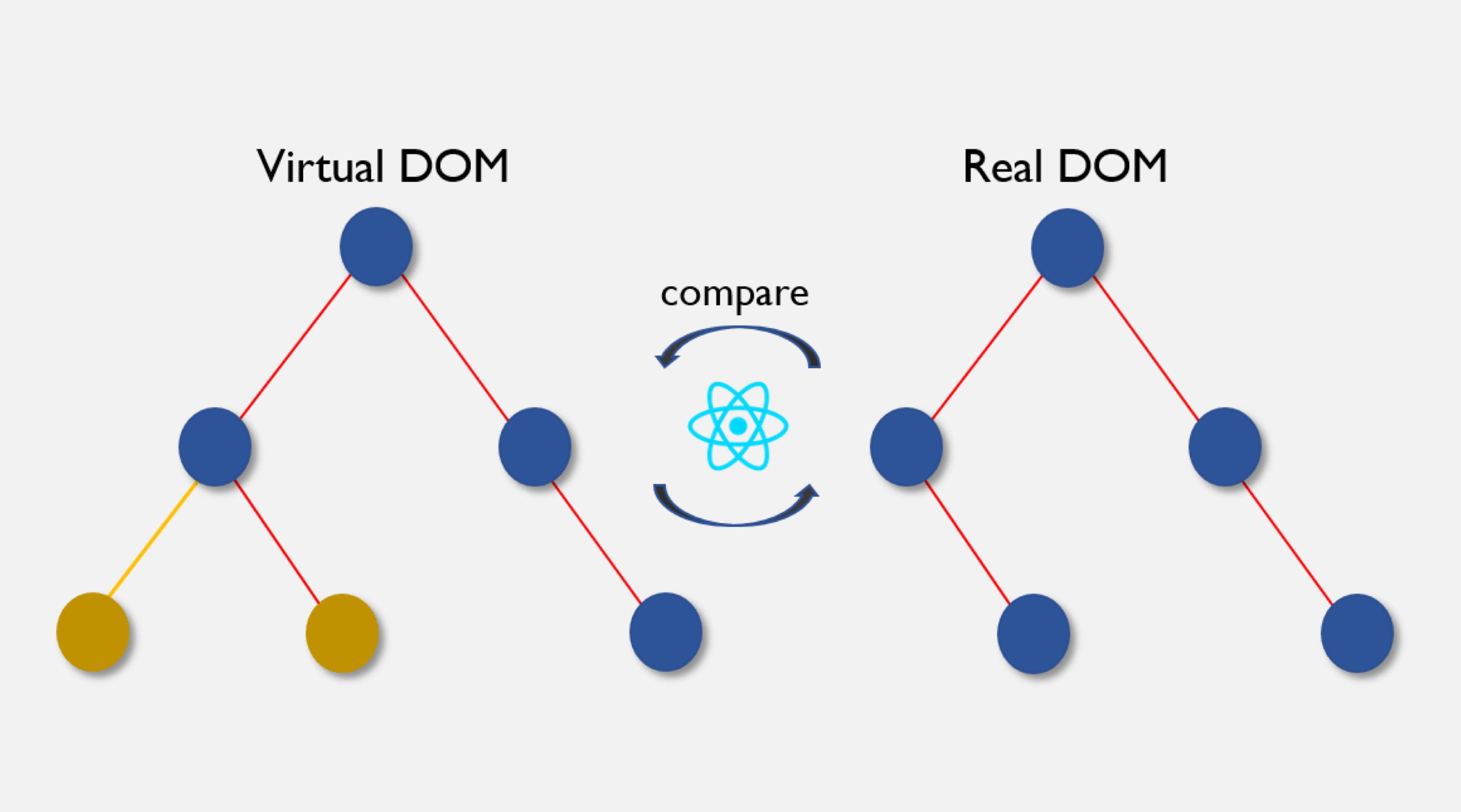 It’s pretty accessible to master the framework and develop software with its help. One-way data binding, for instance, helps developers to forget about the pain of adding numerous code customizations in parent components when there is a need to modernize inherited structures.

Moreover, the isomorphic nature of React allows reusing the same code both on the user and server side of the software, freeing your devs from the need to duplicate the same functionality in different ways.

By the way, not all development teams by far characterize the one-way binding as a positive thing that enables flexibility. Some believe that insufficiently experienced programmers may accidentally make a bunch of code errors and disturb dependencies without even noticing it all.

However, React allows writing a truly clean, lightweight code that isn’t interspersed with excessive elements. That’s why we consider the one-way data binding feature beneficial to your business success still.

With the JS-based code lying in the foundation of your software backend, all the content loads utterly fast, taking no more than 3 seconds. This is a major point to affect your search engine results position and advance your SEO.

Among the main principles of establishing React in the first place was to provide devs with the optimal capabilities for writing reusable components, i.e., the components that can be used over and over again both within the same project and in third-party solutions, customizing only the connections with other existing components. Using React.js, development companies get to significantly reduce the time it takes to finish up the project.

Moreover, this reusability goes for all types of software compatible with the library: the code that was once written for the website implementation can be used repeatedly further on even for the creation of an app. As such, you won’t need two separate dev teams to build a website and an app for a single client.

The feature also aids in reducing the number of code errors. Due to their modular structure, solutions built via React.js are pretty easily tested and become more predictable in their functionality.

As we’ve already mentioned, React JS was created and is still supported by the Facebook team. What does this mean for companies that prefer using React in their projects? On top of all, you get access to the latest, advanced third-party solutions (due to the open-source nature of the framework).

Thus, React allows creating the most extraordinary, fancy digital products with the potential of reaching Facebook’s functionality traits. In general, the popularity and prevalent use of the library cannot really be questioned - it’s now used by over 40 million developers from all over the world.

Who is using React nowadays? Some of the most ambitious companies out there focused on the high performance and flexibility of software. The library can be safely deemed as the top solution for creating user interfaces. In the long run, companies that use React get a great opportunity to accelerate the whole project workflow by reusing components in numerous projects over and over again.

You also shouldn’t forget that React.js was created and is maintained right now by one of the best software engineering teams out there. This may be a sufficient reason alone to go for this particular framework.

If you wish to enter the rows of insightful companies using React.js, planning to create your own digital product with its help - don’t waste any time and start looking for someone who can create a high-quality, reliable turnkey solution for you. Fortunately, you don’t have to look far - turn to us! We have a team of ace developers that have successfully launched dozens of React.js-based projects and are now looking to pave the way to your company’s success as well.

Wanna build your product with React?