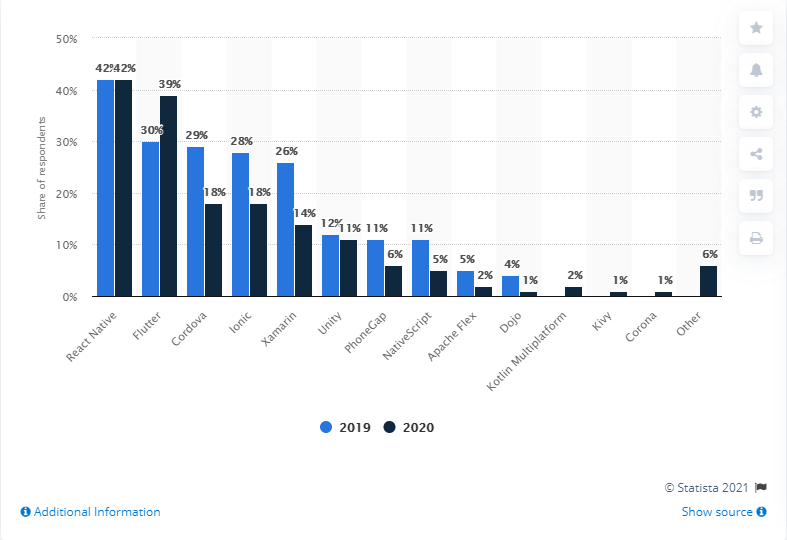 What is React Native: Quick Reference

So what is React Native? It is a popular JS framework for building natively rendered iOS/Android apps. It is based on the React JS library developed by Facebook and designed to create user interfaces. Nowadays, the library is efficiently used to build not only web applications but also high-quality mobile software. Instagram, Skype, and Airbnb mobile apps are built on React Native.

React Native was created by Facebook in 2013 as an open-source solution. Unlike the larger MVC frameworks, this framework solves a widespread problem: interface rendering. On top of that, it is lightweight but provides high performance, which is important for creating pages with dynamically updated content. Plus, thanks to its module structure, React Native encourages you to write almost 90% reusable code.

Unlike Cordova or Ionic that wraps the application in a native wrapper, React Native uses the original platform’s APIs natively. This means that applications created with its help are native-like.

Once you've written your app code in React Native, you can deploy it to different devices and platforms without worrying about incompatibility issues. This is one of the major advantages of React Native that helps save lots of development time and budget.

Should I choose React Native?

You can save about 30 percent (since some of the code still has to be reproduced for each platform separately). If we talk about applications that must interact with the hardware of mobile devices (a camera, GPS, and other sensors), you can save no more than 10% of native development costs.

React Native is also famous for its optimized debugging process. Hot reloading and live reloading features allow you to either connect new code blocks during runtime, saving the current state of the app, or to reload/update the entire application when the file changes, respectively.

But When Do I Need a Native Approach to Mobile Development?

Native applications are developed for a specific hardware and software platform and are written in languages created specifically for this platform. Both iOS and Android have their own SDKs and their own technology stacks, tied to a specific programming language. For instance, the native languages ​​for Android are Java and Kotlin, and for iOS - Swift and Objective-C.

Should I choose native frameworks?

As you can imagine, React Native helps product owners when there is a need to cut the budget and speed up the application release time for all platforms. However, there are a number of reasons that lead developers to prefer the traditional - native approach - to mobile app development.

React Native vs Native Development: What Is Better?

So which one should you choose: React Native vs native development tools?

As we can see from the React Native pros and cons, cross-platform development is a perfect choice for applications with constantly updated content (that is, where high-quality rendering is needed), for example, newsfeed apps. But in the case when the application exploits a sufficiently large amount of hardware resources of the user device, it is better to give preference to native development.

Whatever you choose - React Native vs native development, you definitely cannot do without the help of experienced specialists. If you are seeking it at the moment, check out our portfolio and contact our experts to discuss the details and budget of your project. We have years of expertise under our belt to implement a full-cycle React Native or regular native app development project of any complexity.

React Native vs Flutter vs Ionic: The Great Three For Hybrid App Development