In web-development terminology, namely, in the list of RESTful web services in Drupal 8, there is a notion of headless or decoupled Drupal websites.

"What is headless architecture?", you might wonder. Basically, a website’s ‘head’, in this case, implies everything related to HTML-rendering. Thus, a headless/decoupled Drupal website is a resource in which a certain third-party element is responsible for rendering, not Drupal. In such a way, the part of a website viewed directly by the users (i.e., frontend) isn’t completely written in Drupal (the real Drupal ‘head’ is hidden from users). This is, basically, what paved the way for the appearance of the term ‘headless’.

As a matter of fact, the ‘headless’ website format, which allows for combination with any JS-based framework, also allows for developers to create ultrafast interfaces featuring a large number of animated and interactive elements.

Talking about the technical side of the headless Drupal websites, such web resources are characterized by their representing all data not in HTML format, but in JSON/XML/HAL+JSON, through RESTful or, sometimes, through non-RESTful services as well. Thus, frontends and backends of such a site would be represented as two separate applications, each of which is being ‘attached’ to a separate subdomain.

Notice also that the eighth version of Drupal is the most finely adapted to the ‘headless’ architecture one. And, so, without further ado - in this feature, you’ll find out how to decouple your Drupal website.

Decoupling Drupal Website: Why Would You Need That Anyway?

Firstly, let’s figure out for what reasons web developers consider an affair of decoupling their Drupal website at all. In fact, employing the ‘headless’ approach, you’ll be able to achieve the following with your web resource:

How Is Decoupling Drupal an Efficient Affair from the Technical Perspective?

Having seen some of the advantages described above, you might quite reasonably think: "If there are things that I don’t like about Drupal, then I’d be better off choosing some other engine. Why would I look for workarounds?" Now, let’s try to figure out what real ‘conveniences’ you might get from decoupling. 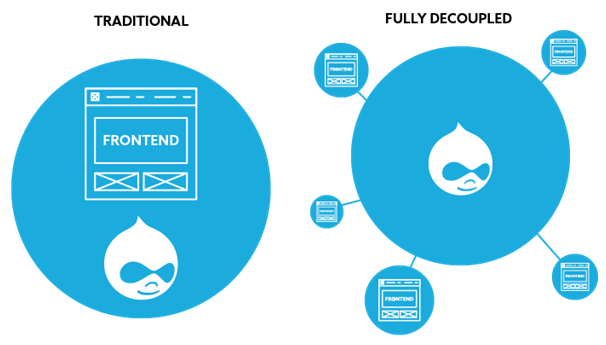 If you have integral experience of working with Drupal, you will know how long and painful its configuration can be. In particular, if you work through JSON API, then the configuration process will take 20 minutes at the most. You’ll only need to define the types of content to fill the website and its features' fields.

The huge positive of this approach is that during each data query, nothing excessive is involved (including copious graphical content). It also provides the ability to render several pages on the frontend part exclusively without the need to turn to a server.

The event processing, which was earlier realized mostly through JQuery JS libraries, can now be implemented with the help of modern JS frameworks that practice reactive programming (when the data flows are fully interconnected with the changes taking place inside a web app). In turn, in the case of JQuery, Drupal has to realize quite a time-consuming algorithm each time, which involves the search for the event, and the implementation of the operations related to processing the respective web page elements.

Agreed, the prospects are quite impressive. Now let’s find out how all that can be implemented in practice with Drupal 8.

Let’s start with the simplest part – frontend. You’ll have to choose a framework based on JS, with which you’ll be able to work confidently. For instance, frameworks/libraries such as VueandReact are perfect for web-development beginners. For the more experienced experts that build big prospects for the future, Angular might be your best bet. The main thing here is to decide what is more important to you – development terms (the optimal choice would be Vue), flexibility (React would be perfect), or seamless correspondence with the rules (Angular ‘raises’ excellent web-developers).

As we’ve already mentioned, Drupal 8 is a preferable choice for the creation of the backend (version 7’s RESTful services aren’t worked out thoroughly enough for the implementation of headless architectures). So, simply connect a REST module (it can be the following options of core modules: Serialization, RESTful web services, HAL, and HTTP Basic Authentication) and, optionally, modules such as JSON API, Relaxed Services, REST UI, among others. As to the non-RESTful tools, the most commonly used one is the GraphQL core module.

You can’t skip the server-side rendering if you want to create an exemplary web solution. You’ll need a virtual server, on which Node.js can be installed. How would a website/web application based on such a ‘weird’ skeleton come out?

You place an index.html file on the yourwebsite.com domain, to which files with .css extension and all scripts are attached. In turn, the data operated by the website is extracted from another domain (we describe that at the beginning of the feature) – backend.yourwebsite.com. Then, the data is simply transmitted to the frontend, where all the links are being processed simultaneously (meaning that there are no server requests in this case). In this manner, only a single page of HTML format loads.

Why Is It So Difficult? Is It Difficult at All?

Well, do you find all that difficult? As a matter of fact, the procedure is quite complicated for beginners, especially, when the implementation terms are limited.

If you are used to working exclusively with Drupal, the employment of JS frameworks would be a new and, probably, not that simple a thing for you (especially, if you decide to work with Angular). But it’s worth it. You get a huge advantage from this approach – the possibility to use the ready-made components – from graphs of random complexity to components stylized according to renowned mobile OS standards.

In such a way, you can significantly decrease the terms required for website coding and enrich the scope of your activities with the practice of creating components in JS frameworks.

As you can see, learning how to ‘behead’ software solutions based on Drupal in short terms isn’t an easy task. Nevertheless, considering the advantages provided by the discussed procedure, it would be silly to completely exclude this option. So, if you have a concept for your own web application, or website based on Drupal 8 that would feature interactive functionality, and dynamically refreshed elements galore, let us help you. We’ll implement your visions the best way possible! Contact us via the contact information on our website and we’ll talk everything over as soon as possible.

Share:
Find out the best practices for decoupled or headless Drupal websites. Here we talk about event processing, frontend and backend, as well as server connection.